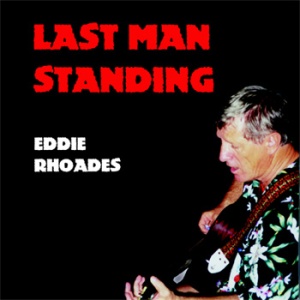 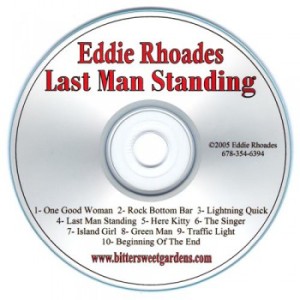 Or to order the “Last Man Standing” CD direct from Eddie Rhoades himself,
please send a check for $10 for each CD plus $2 postage to:

Please include your return address for shipping your CDs to you!

Anyone buying 3 or more copies and living within a 150 mile radius will have their name put in a drawing for a free one hour performance.

Those of you that have already purchased my CD, I would love to hear your comments. Email me at eddie@greenthingie.com.

Most of these songs were written either as I played my guitar late at night in my basement or during the day when it was quiet. Sometimes inspiration strikes in my car or as I lie in bed at night. Songwriting is based on life experiences, creativity, plus imagination and drive.

01 One Good Woman©
A rocking tune I wrote about the irony of a friend who had been married three times saying he was just “Looking For One Good Woman.” I guess I’m just plain lucky to hit on some pretty good lyrics. I wrote down the obvious. Sometimes the words seem to come out of the blue. The song is humorous in that it depicts man who has nothing to offer wanting the best.

02 Rock Bottom Bar©
This is an anthem to bands that are at the bottom of the totem pole. I’ve lived this song. I had notes that lay in a drawer for many years so I finally decided to let someone else take a shot at making a song from those notes, but in typing the e-mail out I kept changing a little here, adding a little there till I finished it myself. I’m proud of the cohesive story it tells. Definitely country – a song that many musicians can identify with.

03 Lightning Quick©
Advice to the young dudes who are doing the bar and party scene. Reminiscent of a Jim Croce tune in beat and tone. Sort of a Boogie number. Basically it means don’t overreact. (Look who’s talking).

04 Last Man Standing©
My buddy, Ivan Tatum, asked how I did on my guitar jam the night before, and I proudly said I was the Last Man Standing. Much later I came up with a driving beat to this title and the words just seemed to flow. I kept it simple and repetitious. Like the song Tom Dooley, this song only has two chords (that’s the only similarity). It’s hard for me to describe but this song is definitely not country. I think it would make a good theme song in a movie. You’ll love the organ part with its haunting sound.

05 Here Kitty©
Thinly veiled innuendos in a peppy little song that is fun to hear. Children will love to sing along with the chorus. You’ll see. (meow)

06 The Singer©
Robert wrote this beautiful song as a tribute to me and I am truly honored. Robert is also the one who got me in the studio to start recording and when you hear all that wonderful backup singing on these songs that sounds like the Jordonaires, it’s Robert. When Robert sings this ballad it brings back memories of John Denver, a great singer and writer. If I only had Robert’s voice…

07 Island Girl©
I had a clickety-clack rhythm in mind plus the line “just another day in paradise”. The words “daughter of the sun, sister of the moon” came out of nowhere and are some of my favorite lyrics. I’ve always loved this style of music like they play in the Caribbean. I wanted to write something to capture the mood I feel in Key West. I’m ready to go there now and visit the Green Parrot Lounge, watch the patrons, and have a Crown and sprite – just one.

08 Green Man©
This song was Robert’s concept and a good one. I added some of the tune, the lead guitar, the last verse and a tweaking of existing verses and Robert allowed me to bill myself as co-author. This novelty tune will hopefully fill an important niche in marketing venues. Played in only one chord. I did a dueling kazoos part on this one. Gotta keep it hokey.

09 Traffic Light©
Boring life in a small town to a tune similar to Chuck Berry style.

10 Beginning Of The End©
I kept on telling my brother Robert that if he wanted to write a hit song then write the saddest song possible and people would not be able to get it out of their minds. I finally took my own advice and wrote this song from a woman’s perspective. My daughter Amanda uses her voice like an instrument to portray the anguish of a young woman in a sad predicament. I’m thinking there are lots of women who can identify with parts of this song or will empathize with the woman in the story. I added a violin to lend that lonesome quality to this song. The lyrics “I wonder Lord are you still there?” are truly sad if you think about a poor soul whose life is so miserable she feels abandoned even by her God. I’ve got a feeling it will be popular.

Sex, Women, and Rock & Roll, Served Up with a Sense of Humor
Reviewer: Cowsister

Last Man Standing is an entertaining new CD featuring classic rock & roll served up in familiar country style. But Eddie Rhoades, who wrote or co-wrote most of the songs, has definitely developed unique fun-loving music reminiscent of John Fogerty, Jimmy Buffett, and Chuck Berry, all wrapped up into one. Eddie’s distinctive voice has a lot of character and I guarantee it will grow on you. Who could ask for more? The CD starts out with a great rock & roll tune, One Good Woman, that will get you dancing around the room. There are several really good dancing songs on this CD with plenty of great rocking guitar and keyboard, including Lightning Quick, Traffic Light, and Here Kitty. The jacket notes for this last song say children will love to sing along with the chorus, but look out for the sexual innuendos. In fact, most of the songs on this CD are full of clever lyrics about sex, women, and rock & roll life, all served up with a sense of humor, of course. The other tracks are pretty good listening as well. Rock Bottom Bar, a melodic Willie Nelson-style ballad that describes the regrets of a dive bar musician, will have you singing along. A really nice Caribbean song is Island Girl, that features some beautiful guitar work by Eddie. The title track, Last Man Standing, is dominated by nostalgic organ performances played in classic early 60s style by producer Bird Youmans, who also stands out on Green Man, a catchy tune about gardening till you turn green. (Eddie is, among other things, a Lifetime Master Gardener.) Only two of the songs are not performed by Eddie. The Singer, written by Eddie’s younger brother Robert Rhoades, is a sentimental tribute to his brother, and I believe he really means what he says. Beginning of the End is a sad country song performed by Eddie’s daughter Amanda Flanagan. It’s the classic tear jerker, so if you have ever been there and done that, you will love the way she sings it. Jim Howe’s violin solos are the perfect compliment. The sound clips on CD Baby really don’t do justice to these songs. I enjoyed hearing the CD so much that I recommended it to my friends, who all agree with me when I say that Last Man Standing is a wonderful first effort. I hope Eddie Rhoades keeps on writing and keeps on singing, too. I promise to keep on listening.

You can see the video of Amanda singing “Beginning of the End” on YouTube!