Yo! That’s what they say in Philadelphia where I just spent several days. From the plane I was wondering what I was seeing on the ground that turned out to be cornfields. It had looked odd from above as the corn had been harvested and the stalks cut for silage. The countryside seemed very open and prarie-like as we drove to Hershey, PA. It was Sunday so the Antique Car Museum was closed. Sorry I missed that. The weather was great – about like home only just a little cooler at night. I had preconceived notions of ice and snow, tall smog – belching smoke stacks, crowded conditions and rude people. It wasn’t like that at all. I remember a song by Moms Apple Pie titled “Good People Everywhere You Go.”

Downtown we saw ginkgo trees two-and-a-half feet in diameter and eight stories tall. We saw sycamore trees that two people couldn’t reach around. In a nearby park another group of trees was loaded with fruit and I think it may have been Red Jade crabapple or Zumi crabapple. While we were staying in town I noticed very few people have yards or even driveways as the houses were built right on the street. 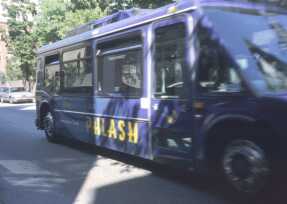 We visited several more parks and museums and saw enormous, expensive artwork and statuary everywhere – gargoyles, griffins, ogres and such. Corporate Yard Art I guess you could call it. There was plenty of public transportation with a purple bus system called The Phlash (see photo at left) and a trolley system that doubled as a subway because part of it ran underground.

Downtown they have a strip called South Street which IS the Mason Dixon line. The funny thing about this area is that it reminds me more of Duval Street in Key West, Florida than anywhere else. The building facades may be brilliant color combinations or may even be a mosaic of tiles and mirrors. The shops carry the widest variety of merchandise you could imagine. There’s something for everyone. There seems to be almost as many restaurants as shops and quite a few post their menu outside at the entrance, just like in Key West. The people in this area are an eclectic mix and it’s a great place to people watch. No one bothers anyone and the whole area feels quite safe in the city of brotherly love.

If you go there, stop at the Olde City Pizza near the Betsy Ross Souvenir Shop and order their famous Philadelphia cheese steak sandwich and tell me if you don’t think the waitress there looks like a voluptuous version of Talia Shire from the movie ROCKY.