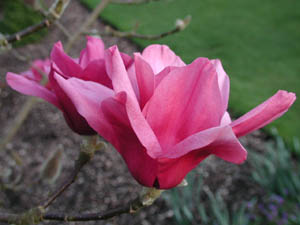 It happened again. As a mature, experienced gardener you’d think I would be immune to this stuff but evidently not. I was standing in the bookstore just killing time waiting for my wife and naturally gravitated directly to the garden books. Perusing them with a jaded eye I read over most of the titles and thought “been there, done that.” Out of sheer boredom I picked up a book on magnolia. I think the authors name was Dorothy Callaway (notice there’s no ‘O’ in Callaway). I am not a total stranger to magnolias, I do have Magnolia macrophylla in my garden which is the native bigleaf magnolia. I also have its smaller brother: M. Asheii which is sometimes referred to as the dwarf bigleaf Florida magnolia. Both are distinguished by three purple blotches inside the flower at the base of every other petal but the shape of the Asheii flower is the more exquisite of the two scrolling over at the top like the head of a violin whereas the bigleaf¹s blossom, though impressive in size, flops just a little- not bad but not as graceful as the Asheii. Dreamily I flipped through the pages of this book as I paused to admire photos of mature specimens or a yellow-petaled variety named ‘Butterflies’ when, nearly to the last page, I saw it. The most gorgeous magnolia I have ever seen. The variety was ‘Vulcan’ which was hybridized by Felix Jury of New Zealand. Its parentage is M. campbellii var. mollicomata ‘Lanarth’ x M. liliflora hybrid. The technical botanical terms are required when being specific about a plant. I must pause here and remind you that I am not Shakespeare or Henry Mitchell and therefore simply do not have the words to adequately describe the beauty and the color of this vivid red flower back-lit by the sun. At that exact moment I was smitten and it was much worse than spring fever, it was more like rapture. My only thought was “I have got to have this plant.” Easier said than done! It took the power of the Internet and some, I wouldn’t call it surfing, more like fumbling around, before I found a source:

The cost, along with shipping and handling, was $50. Kind of pricey but at this stage of life who cares? I told my wife “I don’t smoke or gamble, don’t have a motorcycle or a hunting rifle or a fishing boat therefore I am entitled to spend whatever I want on my garden habit.” Did I say habit? I meant hobby. The plant delivered to me was a large, healthy specimen which I immediately bumped up from its one gallon pot to a five gallon pot while I decided where to place it and began amending the soil. Be advised amending does not mean fertilizing, it means simply improving the soil with organic matter. I gave this specimen plant a prime location in the very center of the front yard in an island where it will be safe from the dreaded lawnmower disease. It was center stage.

On reading another book on magnolias I bought by Graham Rankin, I learned ‘Vulcan’ can start blooming at three years of age but the color may not come true at first. At my new home on a cul-de-sac someday people will come from miles around to see this tree when it matures to light up the sky with its iridescent brilliance and they will oooh and aaaah and proclaim what a visionary I was to recognize the beauty of this tree early-on. Then they too will be smitten.